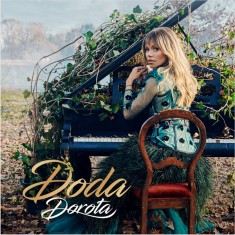 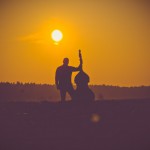 Konrad was born on April 2, 1980 in Warsaw. He grew up surrounded by musicians and artists – his father was a bass guitarist and his grandfather – a violin player.
Although in primary music school he used to play the violin, bass sounds accompanied him all the time..

It is necessary to mention that also during his further education playing the violin was not totally satisfactory for Konrad. At the age of thirteen, after one of the exams, the examining board suggested changing the instrument and, as he has never been a tiny person, they suggested something bigger. As it turned out a bit later, the school had had one old, dusty double bass which they did not know what to do with. After a long deliberation the school authorities decided to employ a double bass teacher especially for Konrad.
That was a moment of a huge change in his life.
Konrad finished primary music school as a Double Bass Player… 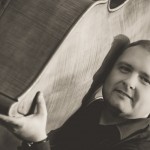 Konrad began his professional career in secondary music school. He performed with many orchestras all over Europe. At the same time he started cooperation with Folk Song and Dance Ensemble of Warsaw University „Warszawianka” With this ensemble he played hundreds of concerts travelling around Mexico, France, Belgium, Italy, South Korea, Germany, Spain and many other countries.

In secondary school he studied both classical and light music. He used to play a lot of chamber as well as symphonic music taking part in many workshops and master classes in Poland and abroad. For some time he was a student of two best secondary music schools in Poland – classical and jazz school – simultaneously. After that he exchanged the famous “Miodowa” (classical school) and “Bednarska” (jazz school) for so called “Okólnik” and became a student of The Frederick Chopin University of Music in Warsaw (at that time called Chopin Academy of Music).
He passed the entrance exams easily, with top marks. He practiced a lot… 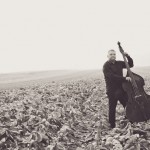 It brought about a lot of respect and resulted in many concert tours. Had not it been for his wife, he would not have received his student’s registration book. When other students were present at the Ceremony of Matriculation, Konrad played a concert for Polish President in Belgium.
At that time he realized that his profession requires a lot of dedication and … confidence in law enforcement agencies. The concert took place right after 9-11 WTC Attack and very strict security measures were introduced…nobody knew the exact venue of the concert.
During his studies at The Chopin University Konrad performed and recorded with many outstanding artists and a Polish top jazz club – Tygmont – named a jazz quartet, in which he played, a jazz promise of Warsaw
He played his diploma recital in a jazz trio:
Krzysztof Herdzin – piano
Konrad Kubicki – double bass
Paweł Dobrowolski – drums
Apart from jazz repertoir, he also played several classical pieces. A long-term fascination with NHØP resulted in master’s thesis entitled „Niels-Henning Ørsted Pedersen – life and works; aspects of musical performance analysis and the contribution to the development of double bass playing techniques”, which received a very positive reception.
A switch from the violin to the double bass resulted in greater fondness for making music in various ensembles. Konrad has cooperated with many Polish orchestras. As a soloist he has recorded, together with Warsaw Philharmonic, works of Krzysztof Penderecki for a prestigious German Record Label – Naxos.
One of his favourite performances was the concert during World Trade Organization meeting in Warsaw’s National Theatre, before which he had to wander through the deserted city center in a tuxedo carrying the instrument.…
He has recorded several dozen programmes for TVP, Polsat and TVN.
He has taken part in many festivals as a rhythm section member.
An inborn sense of humour, classical music education and an opinion that music has many faces resulted in cooperation with Filharmonia Dowcipu – a classical orchestra unconventionally interpreting both classical masterpieces and light music hits.
Konrad also shares his musical experience with young enthusiast both as a school teacher and during workshops and master classes.
He likes to spend his leisure time playing the instrument or resting with his wife, most willingly under the Spanish sun.
He has had the honour to cooperate with numerous outstanding artists – record, play concerts, accompany…
Michał Bajor
Danuta Błażejczyk
Jacek Bończyk
Urszula Borkowska
Monika Brodka
Vadim Brodsky
Piotr Cugowski
Katarzyna Dąbrowska
Giora Feidman
Tomasz Filipczak
Wojciech Gęsicki
Franz Hautzinger
Krzysztof Herdzin
Piotr Komorowski
Izabela Kopeć
Ron Korb
Włodzimierz Korcz
Zenon Laskowik
Alicja Majewska
Waldemar Malicki
Halina Mlynkova
Antoni Muracki
Zbigniew Namysłowski
Katarzyna Orczyk
Dorota Osińska
Olga Pasiecznik
Marcin Przybylski
Paulina Przybysz
Tamara Raven
Kate Ryan
Ryszard Rynkowski
Anna Sroka
Mika Urbaniak
Susan Weinert
Katarzyna Wilk
Zbigniew Wodecki
He has cooperated with the following institutions, orchestras and ensembles:
·    Filharmonia Dowcipu
·    Warsaw Philharmonic
·    Sinfonia Varsovia
·    Polish Radio Symphony Orchestra
·    Sinfonia Iuventus
·    The State Jewish Theatre
·    Folk Song and Dance Ensemble of Warsaw University „Warszawianka”
·    The Polish Theatre in Warsaw
·    Na Woli Theatre
·    Laboratory of Drama

He recorded film music for, among others: